Creativity and the Brain

I’m kidding with the last one–brains are important to our pursuits as humans. However, recent neuroscientific endeavors have found that the act of creativity surpasses the popular notion of tapping into specific areas of the brain. Rather, creativity is a process involving interplay between various portions of the brain and “bisociation” in which one forms connections between previously unrelated “planes of thought”. [i]

Ideas regarding the teaching and application of creativity apply to our work at LAS in various ways, the most obvious being the need for creativity in approaching, processing, and solving problems. The creative process, or more specifically, “whole brain creativity” is wonderfully expressed by Graham Wallis’ four stages of the creative process: preparation, incubation, illumination, and verification[ii]. The following image[iii] overlays Wallis’ approach to creativity on Ned Hermann’s Four Quadrant model of the brain[iv], which demonstrates the “whole brain thinking” approach. 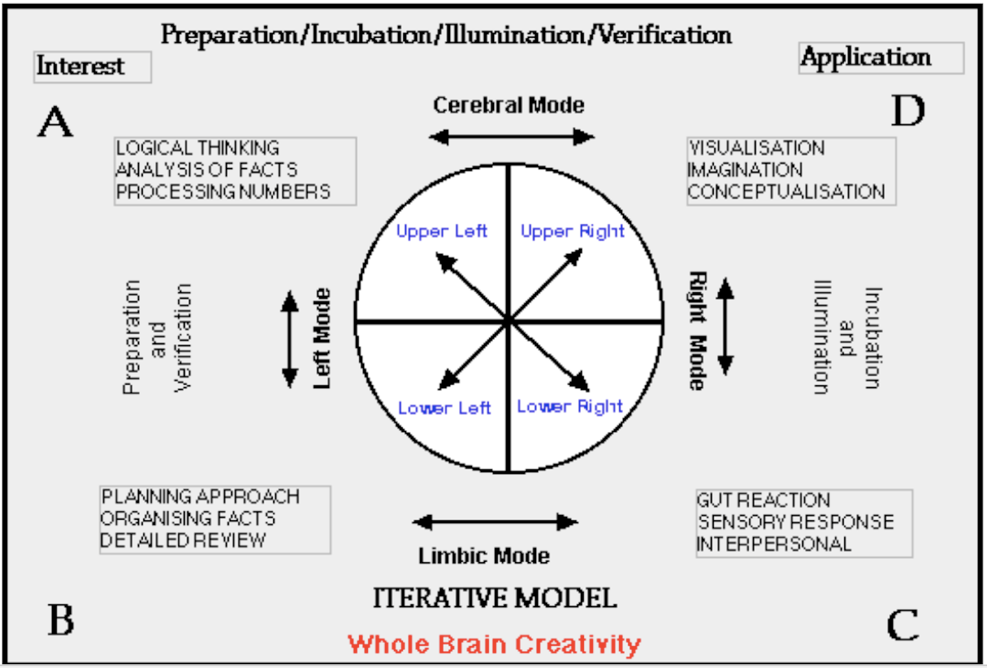 At LAS, our approach to problem solving follows these pathways: first, students must process and comprehend the issue to be solved, whether that occurs as a test question or life challenge which impedes their success. Next, after engaging the problem, we develop an approach to solving the issue by analyzing the various elements of the issue. Our internal and external reactions to knowledge helps shape of development of solutions. This includes our interactions with ourselves and others, such as a LAS scholastic manager or medical coach, teachers, or classmates. Lastly, the solution is conceptualized in a manner that allows for application and synthesis of an idea or theory.

Herrman’s conjecture regarding the interactions of brain regions in creative problem solving has been bolstered by recent research showing that “the weight of evidence has now shifted in support of the view that cognition results from the dynamic interactions of distributed brain areas operating in large-scale networks”. [v]

So, we know that the “left brain, right brain” idea is better elucidated by the premise of whole brain interactions, but how do we make creativity a skill that learners access and implement more readily?

There has been a recent proliferation of books, courses, and degree programs designed to teach creativity, however, the main connection between them is the identification of creativity as a process rather than a fixed trait. In a 2016 article, Green et al. of having medical student engage in creative pursuits as a mechanism for requiring risk and producing failure within a controlled environment as a means for developing creativity and resilience.[vi] A blog article from the Scientific American details three large-scale brain networks critical to understanding the neuroscience of creativity: the executive attention network, the imagination network, and the salience network.[vii] These are precisely the networks we work to stimulate and cultivate within our work with clients at LAS. As one of the intangibles of our work, LAS promotes creativity at every turn.

[i] Koestler, A. (1975). The act of creation: a study of the conscious and unconscious in science and art. New York: Dell Pub.

Get ahead! LAS trained Educational Coaches are ready to help you co-construct an Individual Education Plan and provide structure, support and accountability.